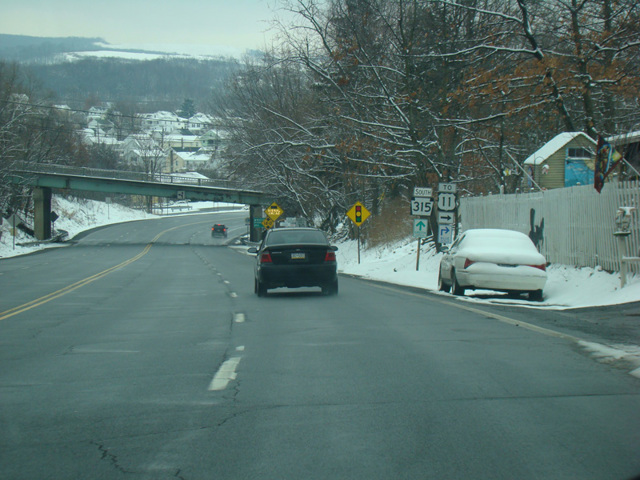 PA 315 is a north/south route running next to I-81 from Wilkes-Barre to Avoca. It begins at the North Cross Valley Expressway (PA 309). Kidder Street (Business PA 309) becomes PA 315 upon crossing the expressway. PA 315 runs north as a four-lane road, some portions divided and others undivided. In Pittston, it crosses I-81 twice, first at exit 175 and then at exits 175A-B. Between the two interchanges with I-81, there is an interchange with the Northeast Extension of the Pennsylvania Turnpike (I-476). It continues north to Avoca, where it ends at exits 178A-B of I-81 and becomes the roadway leading into Wilkes-Barre/Scranton International Airport. For most of its length, PA 315 has no name and is known solely by its number. The exception to this is a short section in Dupont where it is routed along a pair of parallel one-way streets, Chestnut Street and Ziegler Street.