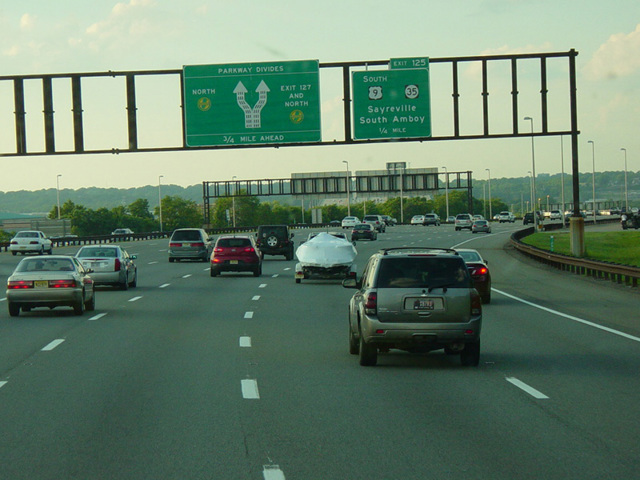 The Garden State Parkway is a major north/south highway in New Jersey. It begins in Cape May, near the southernmost point in the state, and extends north along the Jersey Shore to Woodbridge. There, it crosses the New Jersey Turnpike (I-95) and runs parallel to and a few miles west of it. When the turnpike curves to the east toward the George Washington Bridge, the parkway continues north to the border with New York. It has a short extension on the other side of the state line connecting it to the New York Thruway (I-87/I-287). Like other highways that are designated as parkways, the Garden State Parkway does not allow trucks for a good part of its length. However, trucks are allow south of exit 105, the interchange with the Monmouth Freeway (NJ 18). Unlike the parkways in New York and Connecticut, the Garden State Parkway is a toll highway. It is different from most toll highways, though, in that drivers are not given a ticket when they get on and required to pay a toll when they exit. Instead, there are multiple tollbooths along the highway itself and drivers must pay a toll at each one that they pass. The Garden State Parkway carries an unsigned designation of NJ 444; there is no route number posted.

Copyright © 2003-2020 by David Golub. All rights reserved. The author would like to thank William Roll for contributing photographs and LC for contributing documents to this web site. You may not reproduce any text or photographs on this web site without express permission from the author. Hotlinking of images from this site is strictly prohibited. Route symbols based on graphics from Central PA/MD Roads and Wikipedia. Map icons by MapGlyphs.com.