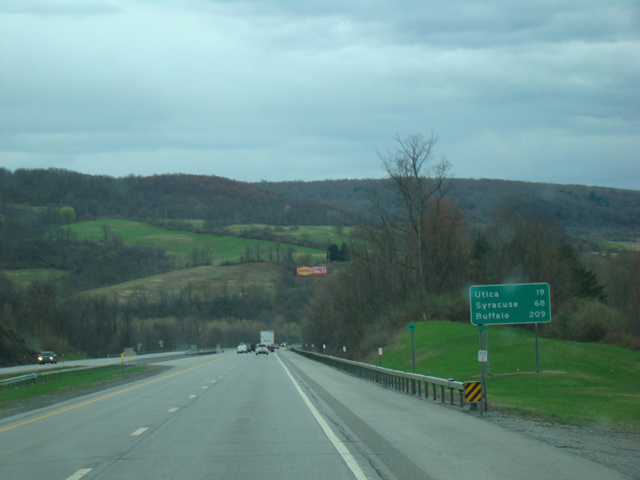 I-90 is the longest interstate is the country, extending from Seattle, WA, all the way to Boston, MA. For most of its length in New York, I-90 follows the New York Thruway, the state's main toll highway and the longest toll highway in the country. The Thruway begins at the border with Pennsylvania where I-90 enters the state. It is one of the few east/west highways where the exit numbers decrease rather than increase from east to west, beginning at 61 near the state line. The Thruway runs northeast along Lake Erie to the suburbs of Buffalo and then turns to the east and crosses the state, passing through or near Rochester, Syracuse, Utica, and Albany.

At exit 24 of the Thruway in Albany, there is a somewhat confusing interchange where the Thruway curves to the south toward New York City and changes designation to become I-87 while continuing the same exit numbering scheme. Here, eastbound traffic must use exit 24 to stay on I-90. There is a short free section of I-90 with no name that passes through Albany and its suburbs. It has its own exit numbering scheme, beginning with exit 1 in Albany and increasing to the east.