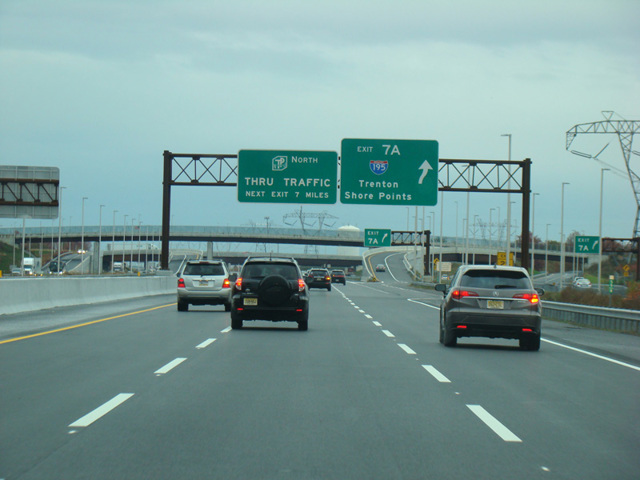 I-95 is a main interstate that runs along the east coast from Florida to Maine. In New Jersey, it follows the New Jersey Turnpike, which is the state's main toll highway. The New Jersey section of I-95 begins at the Delaware River Bridge, which as its name suggests crosses the Delaware River at the eastern end of the Pennsylvania Turnpike. Coming off the bridge, I-95 becomes turnpike extension that runs east for a short distance to end at the mainline of the turnpike, which carries the unsigned designation of NJ 700 south of this point. The mainline of the turnpike runs north toward New York City, carrying the I-95 designation from that point north. It has two sets of lanes in each direction. The inner lanes are for cars only and the outer lanes are for all types of vehicles. In the area near the Lincoln Tunnel (NJ 495), the turnpike splits into two parallel spurs, an eastern spur for traffic to and from the tunnel and a western spur for through traffic. The two spurs merge back together after a few miles. At its northern end, the turnpike has an interchange with I-80 at its eastern terminus, curves to the east, and crosses the George Washington Bridge to New York. I-95 continues into New York as the Cross Bronx Expressway.